Left Bank, the Magic of Medoc 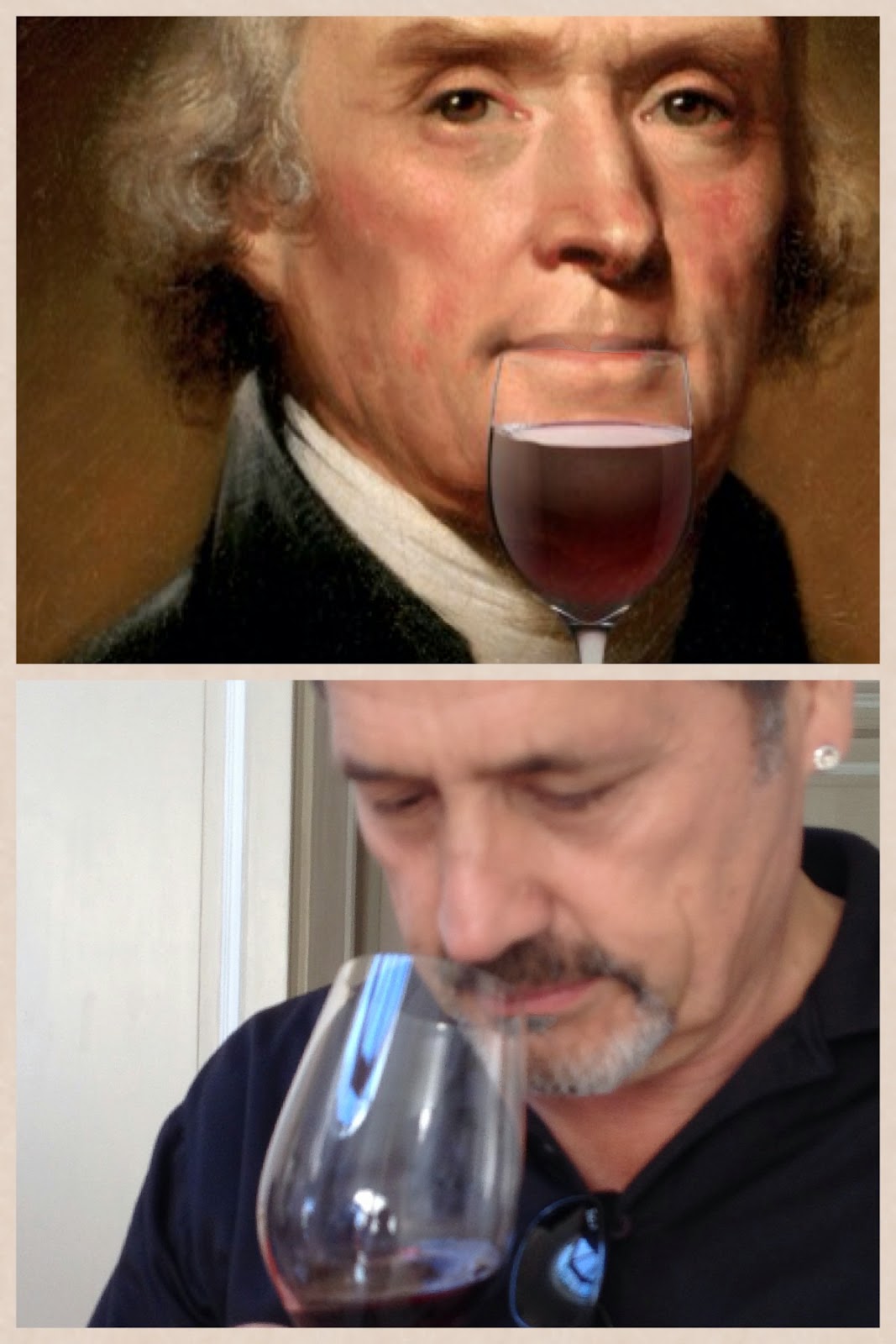 I have always had an admiration for Thomas Jefferson, 3rd President of the USA,  primary drafter of the Declaration of Independence etc...but finding out about his time as US Ambassador to France and his travels in Europe gave me an enophilic relationship with him.  Of course, his visit in Bordeaux lasted 5 days and helped grow the world estimation of Bordeaux wines, I stayed 5 weeks and the only thing growing was my waistline. Nearly 70 years before the Bordeaux/Medoc wines were Classified in 1855, Jefferson had such a nose and insight about wine that he devised his own 1st growth, 2nd growth chart with detailed accurate notes on each Estate.

It is in this Medoc region of the Left Bank that our love of Cabernet Sauvignion was rewarded.  We were able to secure private tours of three 2nd growth vineyards, some established in the 16th & 17th centuries.  (FYI, the Lafite, Latour and Margaux Chateaux were too busy with harvest to meet the President of Swine & Dine, we will see if they receive a good review in this Post humph!)


The Chateaux and vineyards take expected pride in their history and although there is always discussion about the validity of the classification system, (which is as political an argument as you will find anywhere and too involved for this sampling) the tasting and enjoyment of their creation is always first and foremost on their lips.  It has been a pleasure.
Merci Beau coup!

Wanda:
You are looking a little presidential there Rich, maybe you shouldn't have cut your hair. Seeing those noses, maybe you are related to Thomas Jefferson.  History says he had a few more children after Martha died - maybe one settled in Finland.... 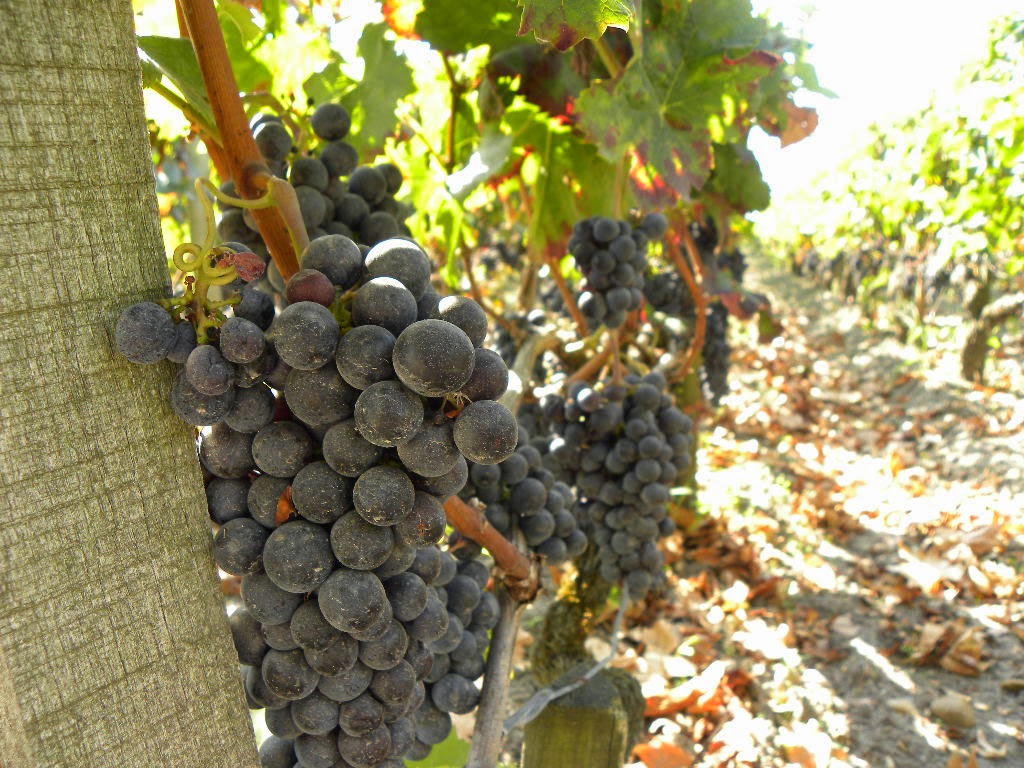 ...Let's get back to the wine.  Our last post talked about the right bank of the the Garonne River.  This is about the left bank where you will still find Merlot and Cabernet Franc grapes, however, this is the soil where the Cabernet Sauvignon thrives best.  The soil is predominately gravel and sand - a hot soil. 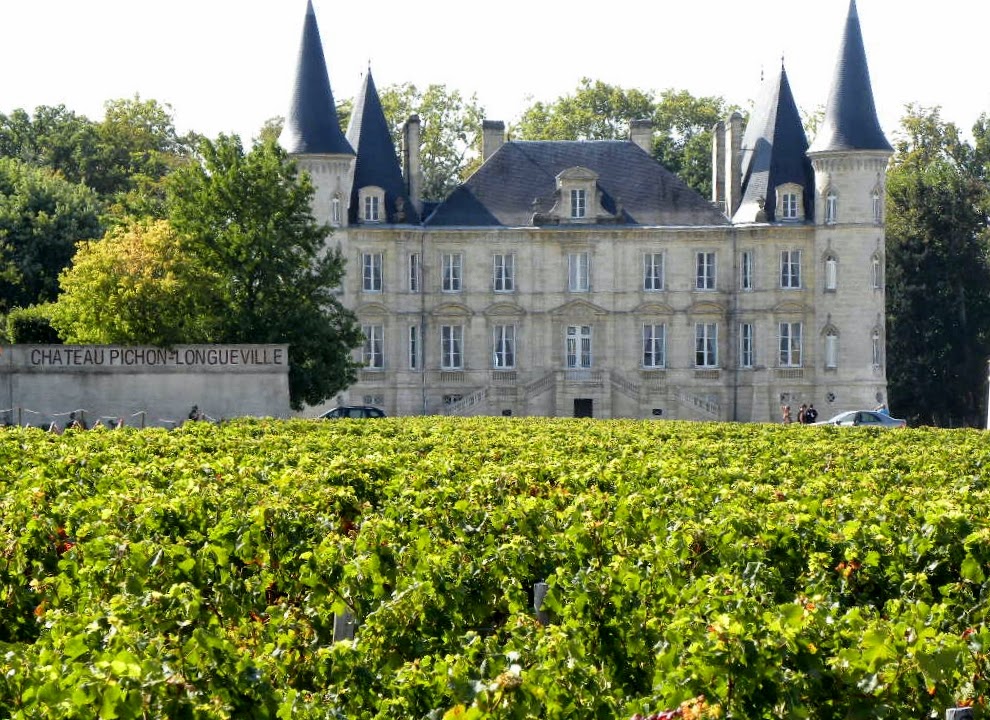 Our first stop on the left bank was at the Chateau Pichon-Longueville in Pauillac where we were met for a private tour with Oenologue Ana Carvalho.  This winery has history dating back to 1694, and is now owned by AXA insurance (purchased in 1987).
Disclosurer: we own AXA stock, yay!  that must make us owners of this winery!! 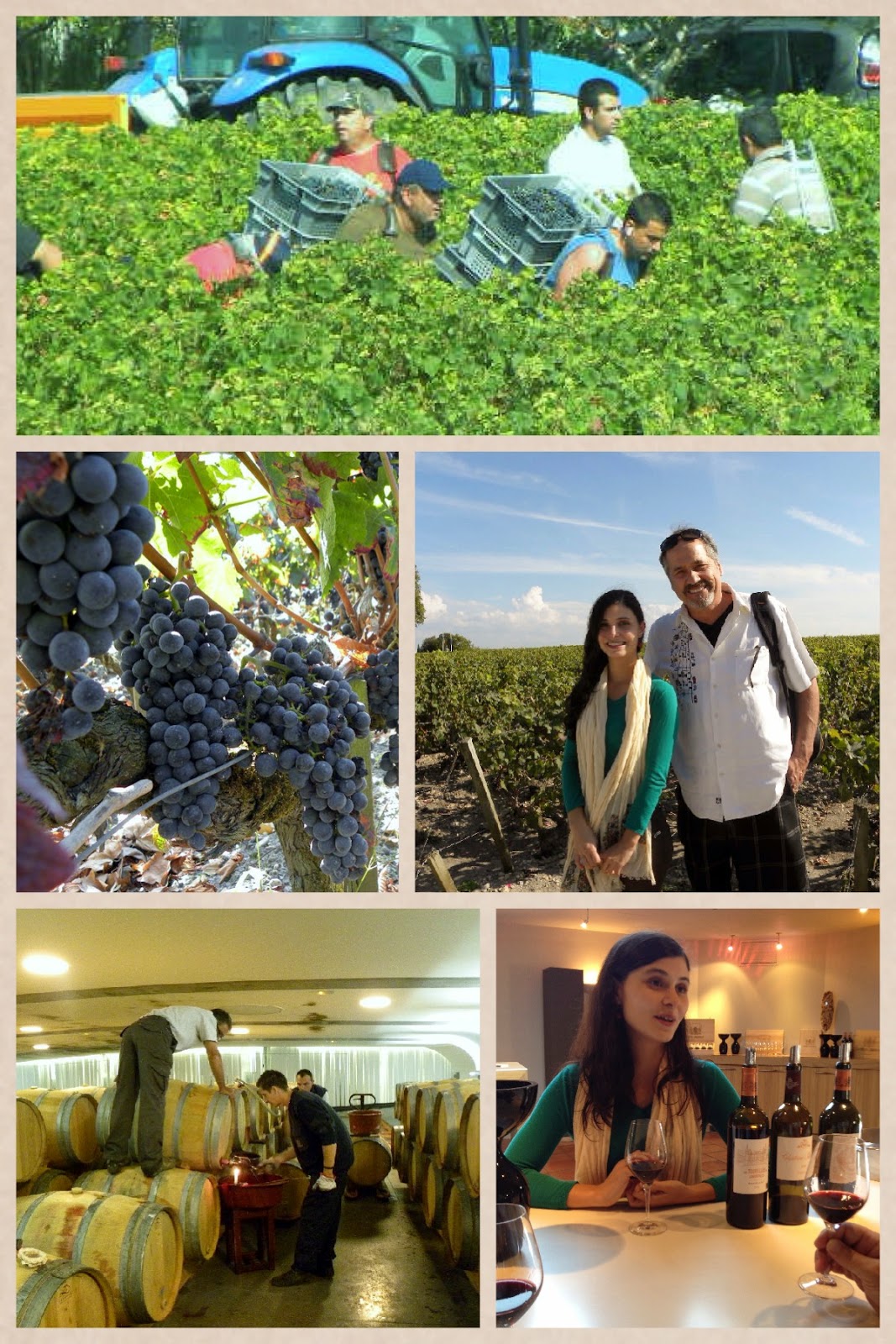 There is no machine harvesting in the Pauillac Appellation, all the grapes are picked by hand.  The Merlot grapes are harvested first followed by the Cabernet grapes in October - pictured are the Cabernet grapes enjoying the last of the warm sun.  Our well traveled guide Ana worked in wineries throughout the world from Europe to South America even New Zealand - (she needs to get out to California) So young with so much knowledge about wine.  We ended the lesson in the tasting room, our favorite part of the tour! 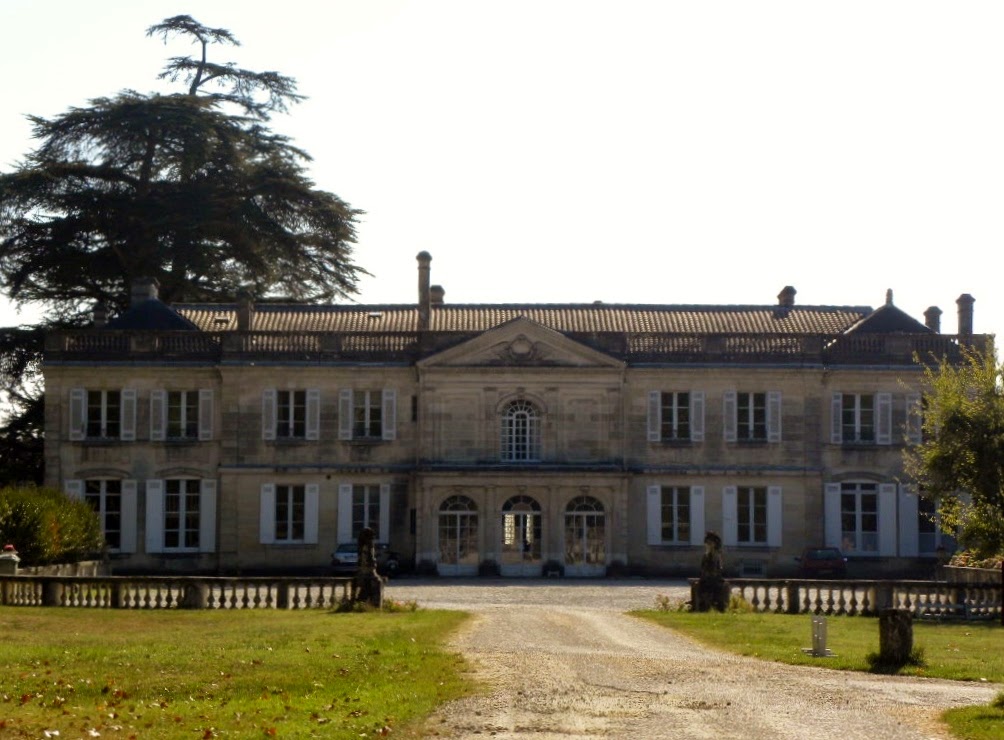 2nd stop was Chateau du Taillan in the Haut-Medoc Appellation.  This is a small family estate with 30 hectares of vineyards run by 5 sisters.  It is one of the oldest wineries in the Medoc area dating back to the 16th century. 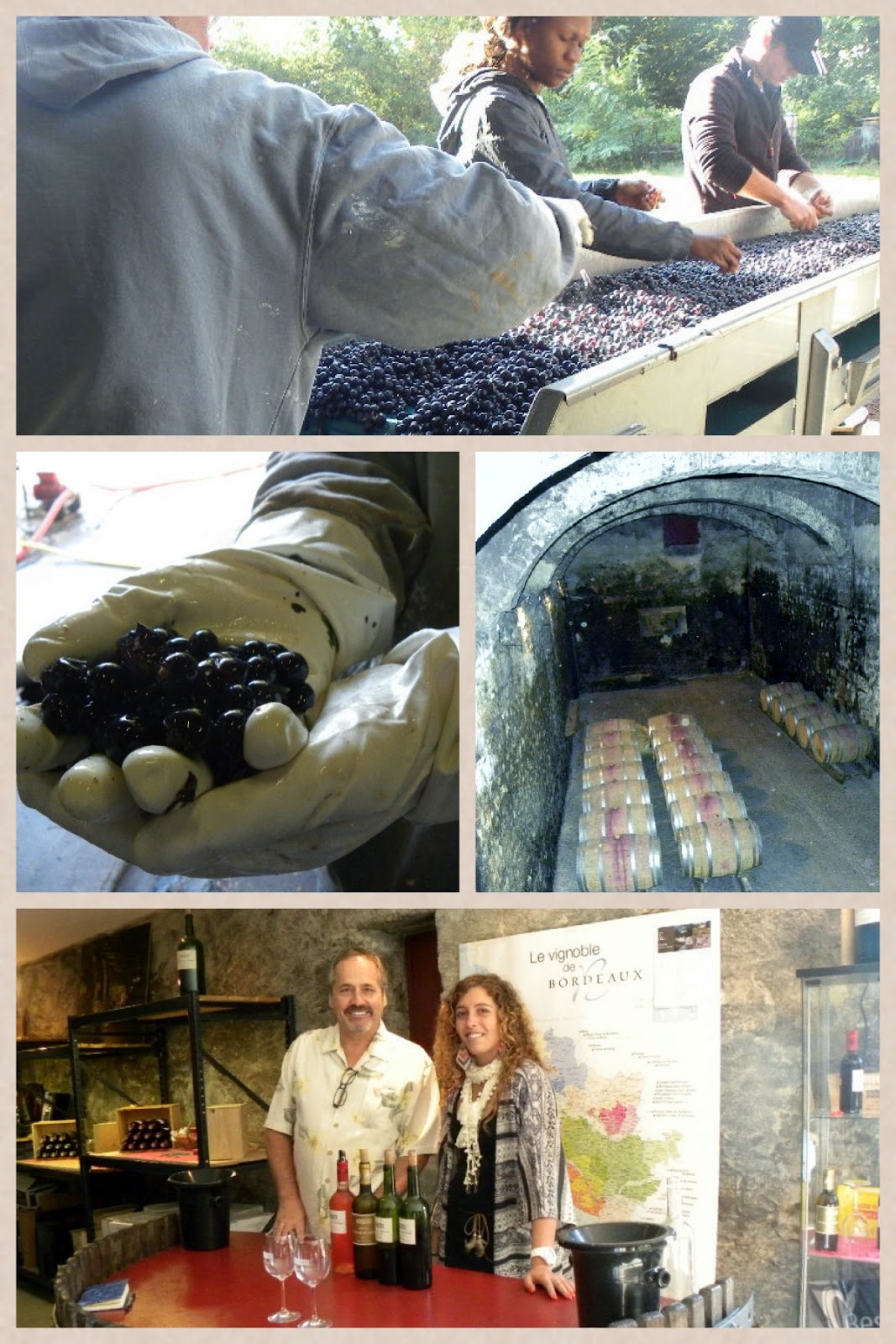 You can see one of the sisters' Marie (her back is to us as she is sorting the grapes and her gloved hand asking us to taste the first pick of the Cabernet grapes.)  The barrel room is in a 16th century  natural cellar that is stunning.  We learned that even though the Medoc soil is normally gravel, more of their soil is Limestone/Clay, thus 70% of their grapes are Merlot, 20% Cabernet Sauvignon, and 10% Cabernet Franc. Pictured with Rich is Johanna, who grew up locally in the area - her expertise was as refreshing as the La Rose du Tailian that we tasted and purchased!

Now we head to the Margaux Appellation and the Chateau Brane-Cantenac, owned by the Lurton Family since 1922. 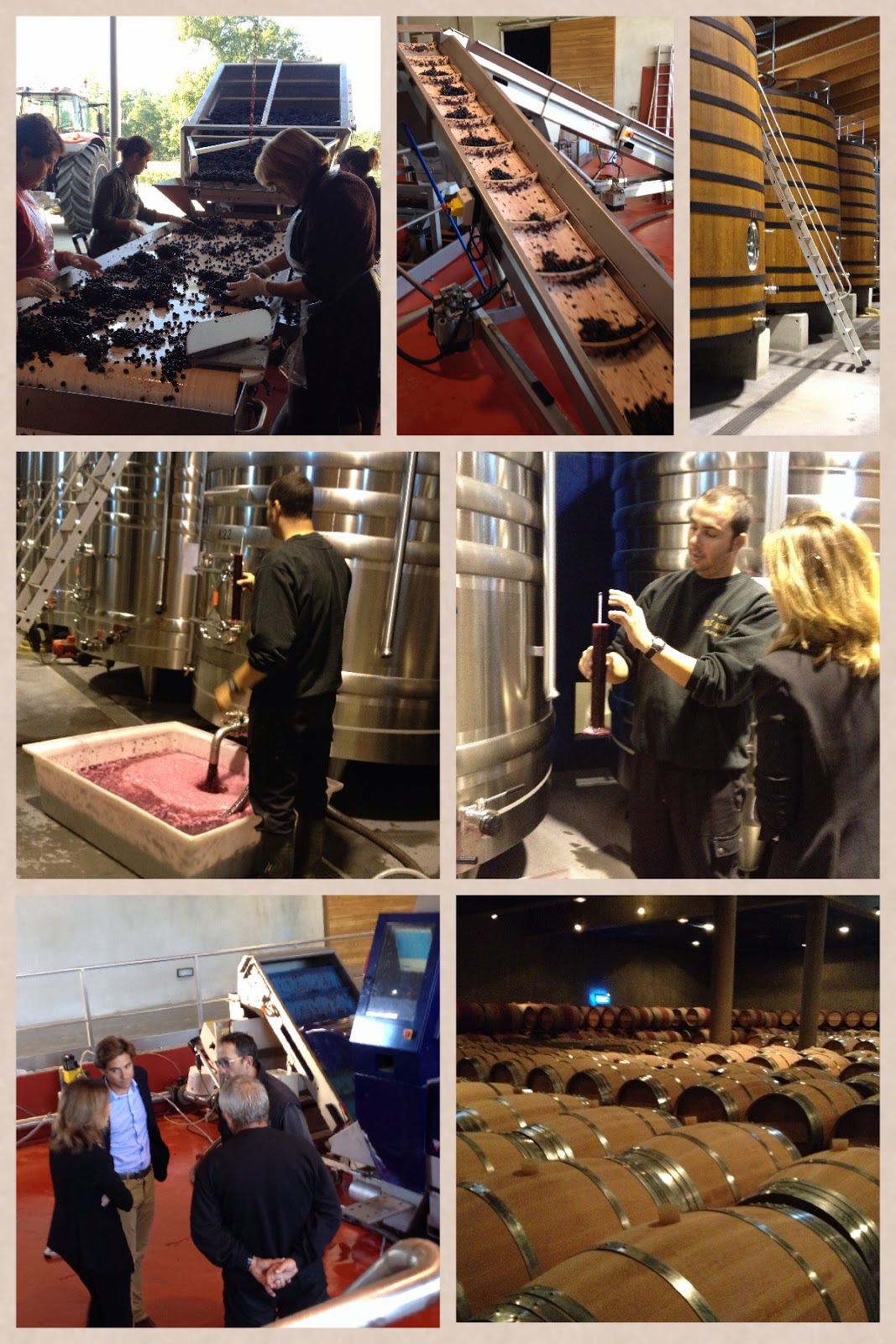 Marie, the "Directrice Commerciale" of Bane-Cantenac took us on her working tour, it was kind of like bring your kids to work day, as we went through the winery.   The Cabernet Sauvignon grape was being worked,  in the fermenting area with all the stainless steel vats, a young man was emptying and refilling vats to allow the grapes to breathe,   Henrique (a courtier or broker for the winery) stayed with us through the tour (below left), and bottom right are the barrels waiting for those 2014 grapes! 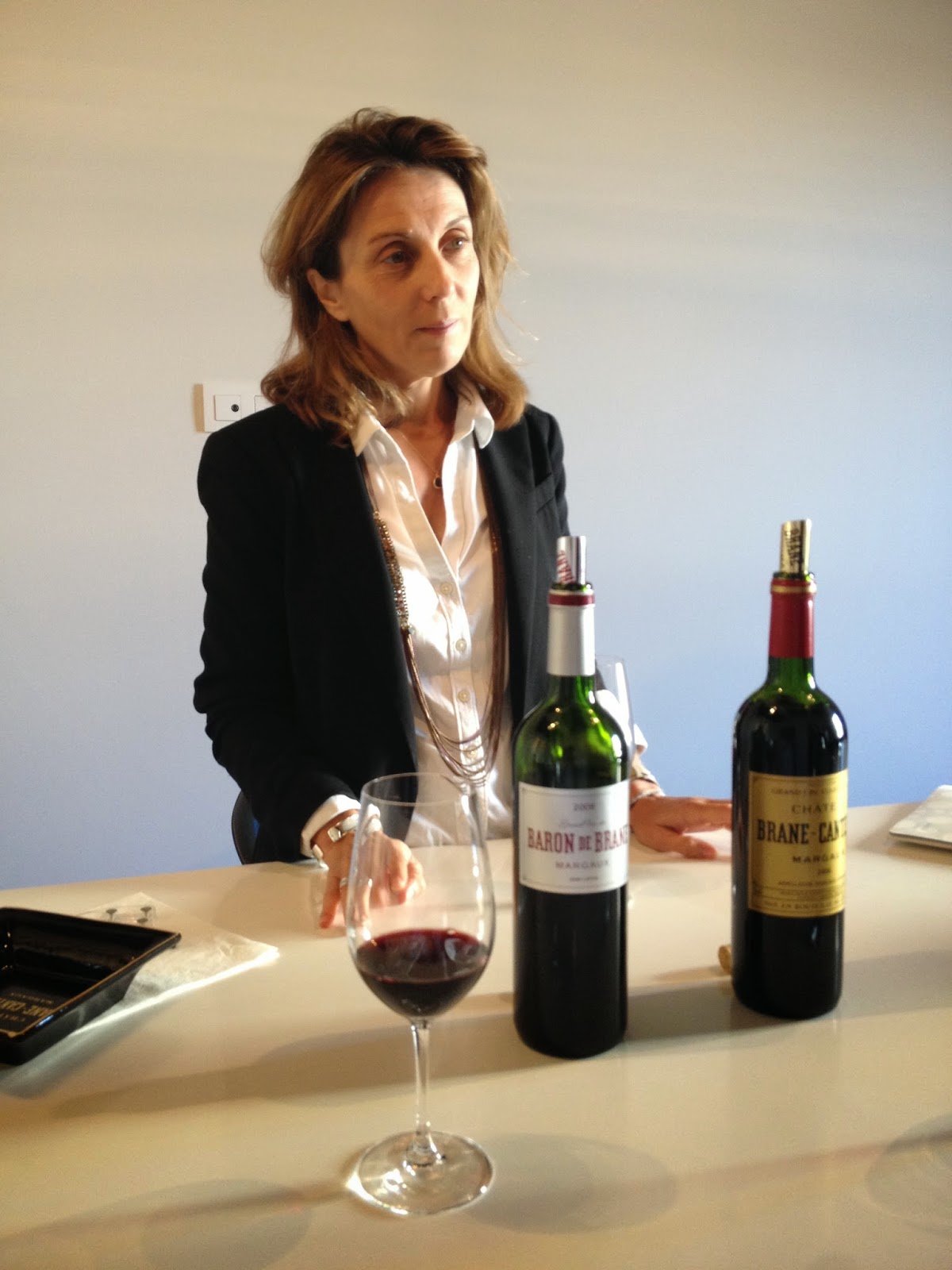 Ahh Marie - You are extraordinary, I love your passion for this industry and the Chateau you work for.  Your explanation of the "Terroir" will stay with me. 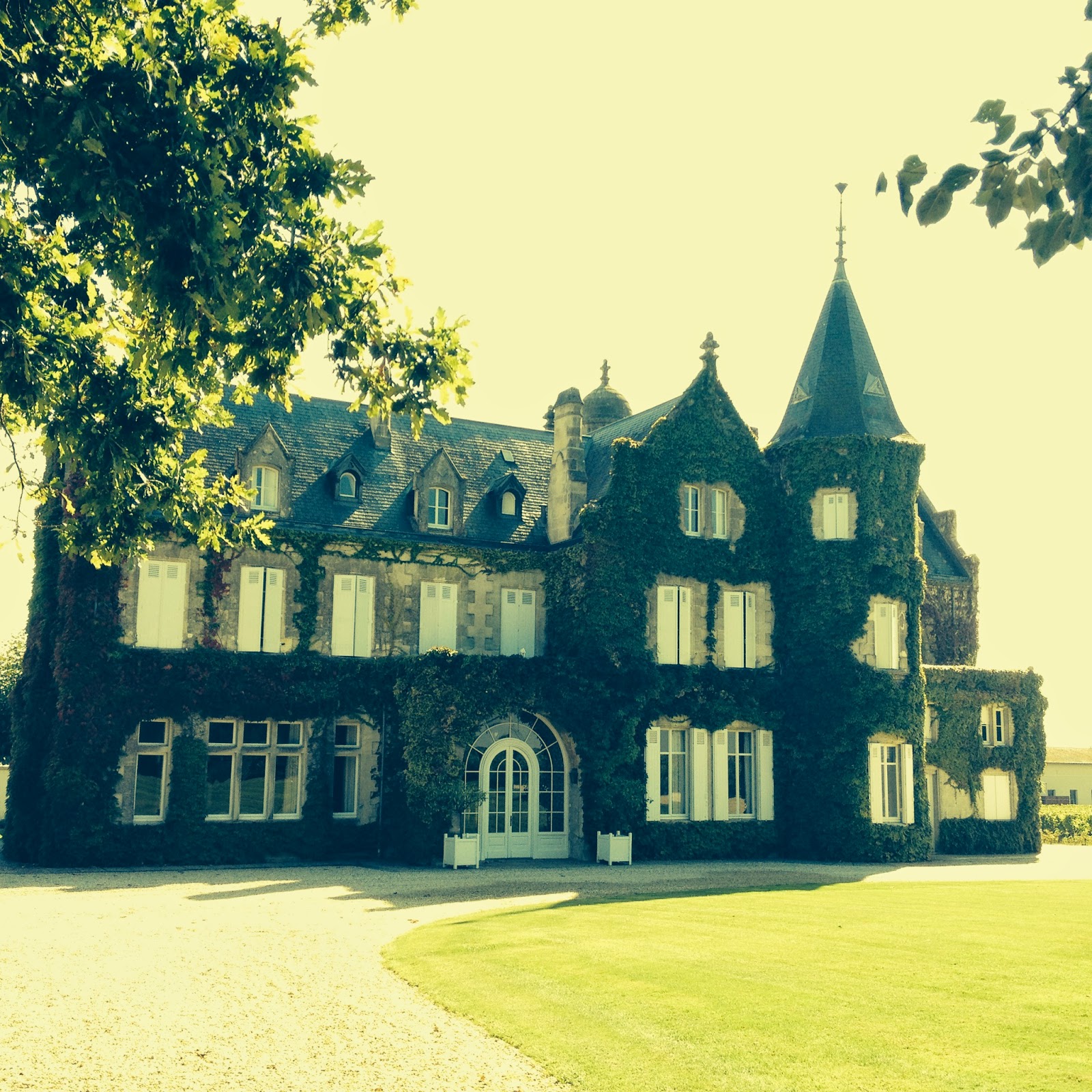 Chateau Lascombes in Margaux.  The first floor of the chateau was built in the 17th century, and built upon by successive owners to the 19th century.  MASCF a French Insurance Co purchased this 118 Hectares (291 acres) 0f vines in 2011. 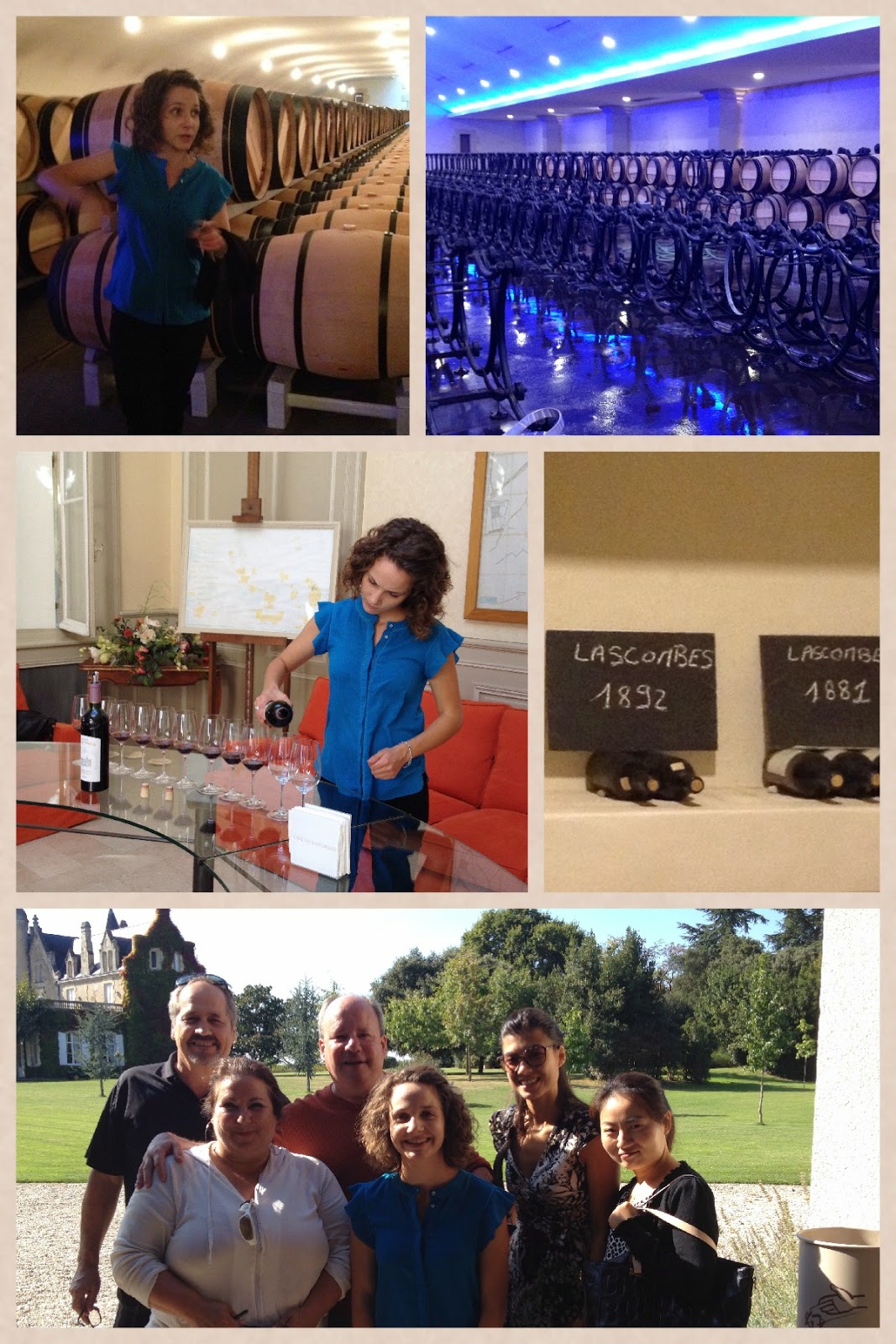 Our chateau guide Benedicte is in the barrel room with the new barrels for the 2014 harvest.
In the cellar of the Chateau Lascombes the oldest bottles were from 1881.
And last pic, our new friends Mark, Nancy, and Delphine and her fellow graduate in Oenology from the University of Bordeaux. 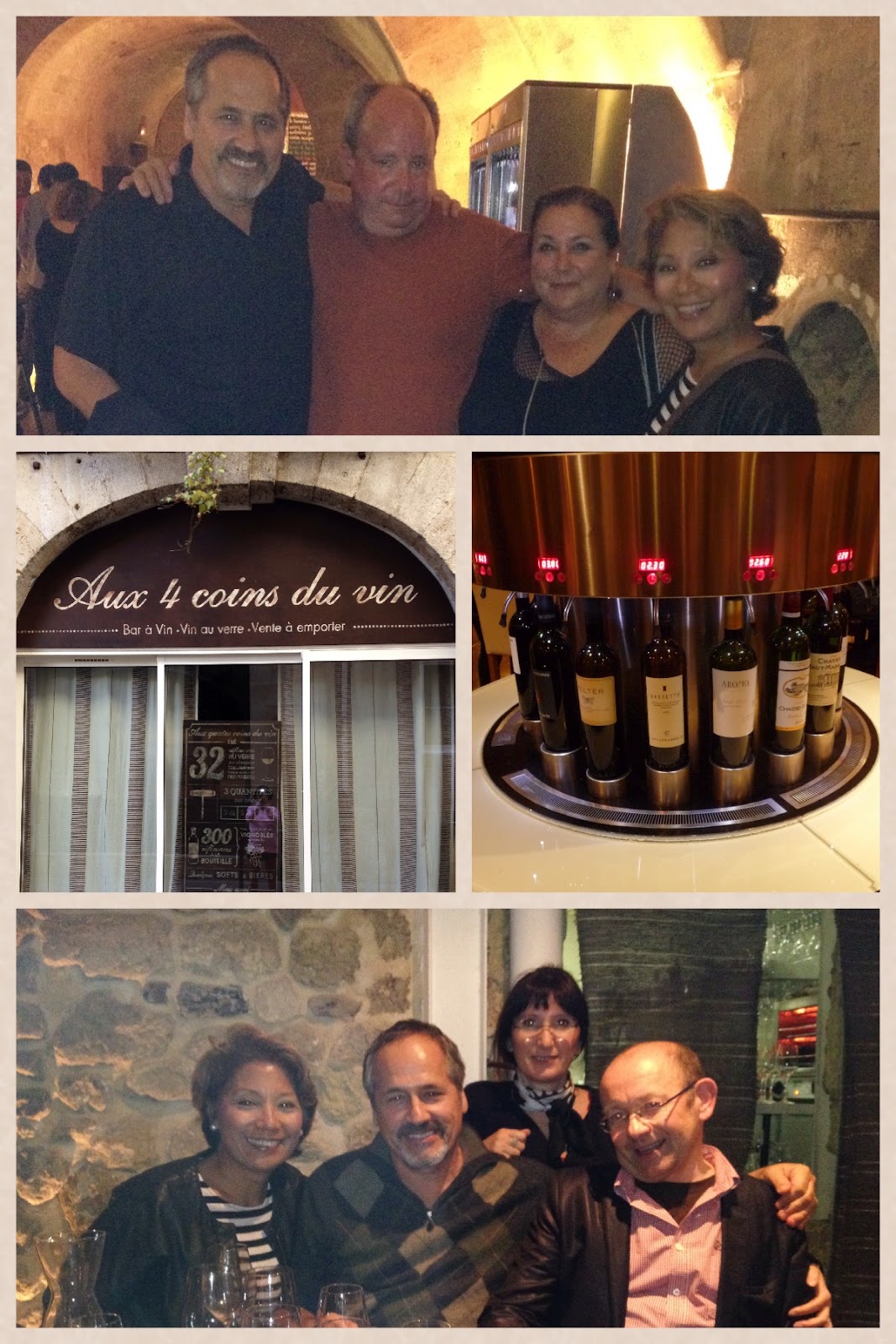 Back in Bordeaux, Delphine directed us to some great wine bars that allowed us to taste as many of the different areas that we missed.  These wine bars were self-serve and had the wines divided by left and right bank.  Since we missed the Lafite, Latour and Margaux Chateaux, we were able to do the tastings here!
We made new friends Mark and Nancy from Greenwich Village New York above and our local friends and Air BnB landlords Particia and Pierre!
Merci Beau Coup!


We did our best to visit as many Bordeaux Appellations and to drink as many bottles of wine as we could - they say Disney is the happiest place on earth- I say Bordeaux is!

Posted by Richer For Wandering at 11:25 AM