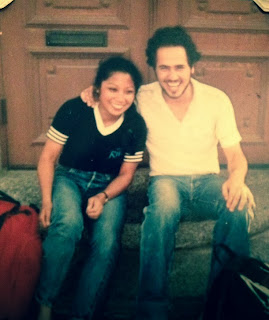 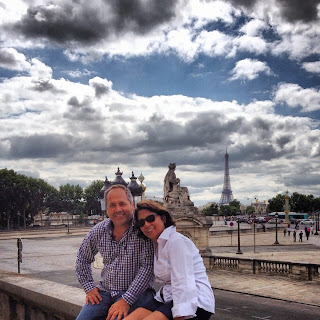 Wanda:
"The name "Wanda" comes from the word  "Wanderer". (Yeah right!)  My mom named me after a little girl in the neighborhood who's mother was always looking for her,  "Wanda Lou - where are you?"  I guess you can say I have lived up to that name.  Growing up, I never wanted to stay home- I was on a bike riding through as much of San Diego as I could.  When I graduated from U.S.D,  I wanted to live anywhere but San Diego - and that first fortuitous move to Porterville was the beginning of a very long relationship, it was where I met Richard!

Did we settle down?  No- he went off to do his thing- I was promoted and moved to another glamour spot, Lancaster.  I wandered all over Southern California- Ventura, Oxnard, Valencia, Encino. -until I was ready for something more.  Richard was working in Vienna, Austria- so when he asked me to join him- what do you think I said?.....YES!  (Was that a proposal?) We get to explore Europe!  It's been a wild adventure with him ever since!

When we finished our travels through Europe, (we ran out of money) we had to come home and look for jobs- perfect, I'll find a job that allows me to wander.  We started in L.A., moved to Chicago and got to know the Midwest. We lived in the Bay Area and had fun in Napa, Benecia, and San Francisco.  Our vacations were always about travel - but way too short.
Settle down?  Yes, we may have settled down for a few years in the OC to raise our adventurous daughter-  that being done, it's  time to start the wandering again ---now with a 4-wheeled spinner instead of a Janus Backpack.......
Wanda

Rich:
"After surviving the Tule Fog" ( a multi-layered metaphor) of a Central California childhood, a BFA from Stephens College for Women (one of 16 men - a completely different survival test), a couple waiter jobs while auditioning for toothpaste ads and Soaps -  all I needed was to be given Kerouac's On the Road - to get the Hell out of LA and start a journey.

The journey started with hitch-hiking back and forth across the USA ( something I would do in the early 80's and probably never today).  I crossed over to the UK and Europe with a backpack and Springsteen on the Walkman.  It was when I got an acting gig in Vienna that I realized I needed Wanda by my side for the journey of a lifetime.  We married in Vienna and began 6 months of a 14 country honeymoon.  After the honeymoon we landed in L.A.  After a 2nd unspectacular attempt at acting, followed by positive reviews as a Stay-at Home Dad and subsequently boffo success at selling  safe Swedish cars, the wanderlust was reignited on a European trip with the daughter after college.

For 32 years we have enjoyed ourselves when searching out new places and now the adventure begins anew, Yes, we get LOST, but hopefully in our disorientation we can discover some places, food, people and experiences that you will get a chance to visit. and enjoy as well."
Rich