Our Life in Ruins Continues 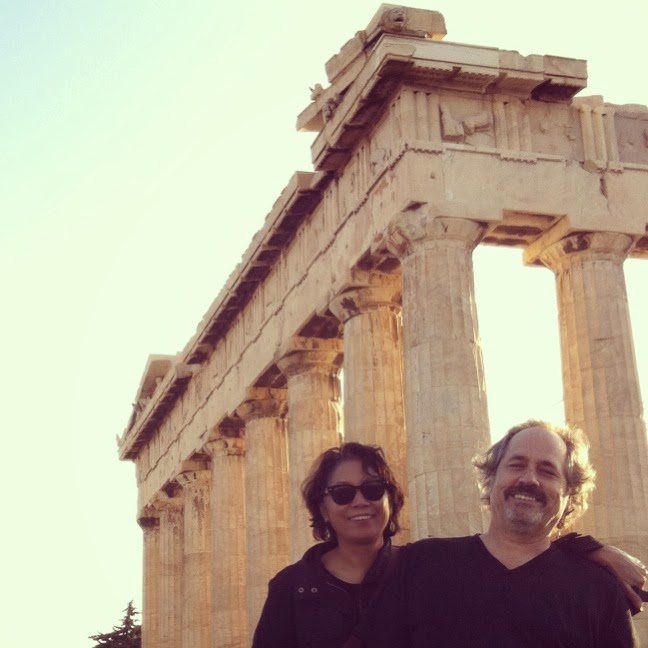 Rich:
It all somehow feels as mythological as the Greek gods, these monumental people, Aristotle, Plato, Socrates etc. of 2500 years ago and their incredible influence on what we do today and their brief appearance on this stage and it's importance. The ideas and philosophies that are the cornerstones of so much of our way of thinking, the cradle of western civilization, democracy, theater, science, literature and more. To walk the same steps that Alexander the Great, Pericles, Aristophanes and other amazing people walked, continually overwhelms me.

We went to the Byzantine & Christian Museum (incredible displays and set-up, not seen enough by visitors) and it described how the Christian influence sent everything into the Dark Ages, (or more PC, the Middle Ages). Almost all advances in literature, science, philosophy, came to a halt. All these great cities, ie. Constantinople and Athens, were sacked and pagan art, sculpture and ideas were abolished after 300AD. These Classical ideas of democracy, philosophy, literature etc. were sent into hiding for years. Centuries of oppression and war clearly illuminates that only with freedom of expression can creativity and humankind improve and evolve.

Wanda:
Wait a minute Aristotle wannabe.....  I too am on top of the Acropolis, and yes Athens is one of the world's oldest cities dating back 3,400 years, and I too am in awe that it is the cradle of western civilization today - but guess what?  They treated their women like property and women were not involved at all in anything but rocking a baby's cradle.   I'm wondering why they revered their immortal goddesses, ie Athena, (who Athens was named after) and treated their mortal women so poorly.  Ahh, I guess like today, it's still a work in progress.....


We promise you, this will be the last post of Ruins (until we get to Rome)

Posted by Richer For Wandering at 10:38 AM