Prague: A Walk in Heaven But A Driver's Hell 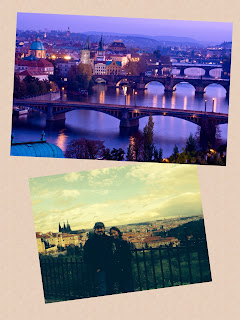 Rich:
Rolling hills and magnificent cathedrals, wide and powerful rivers with 7 picturesque bridges, narrow cobble-stoned streets opening up to market squares filled with vendors selling the most incredible offerings of food and drink you should completely avoid but don't -  Prague is a most beautiful city.  It has such a romantic feel, many Eastern European couples honeymoon/vacation here and take in the sights. There were not many children present, perhaps the reason for all the smiles.

Steeped in the deep history of the Charles IV Luxembourg and the Austro-Hungarian Empires, centuries before the Nazi occupation and Russian Communists plunged them into a dark and grossly unproductive gloomy existence, Prague is now a vibrant city - proud of its early heritage, music, writers and architecture - Dvorak, Mucha, Kafka are still ever-present in the city.  (and one must mention when in the Pubs, they are very proud of all Ice Hockey players that they produce!)

We did get a chance to see a production of Mozart's Don Giovanni at the Estates Theater in Prague. Mozart conducted and presented Don Giovanni here for it's first production.  The classic film Amadeus on Mozart's life  was filmed here and directed by the famous Czech director Milos Forman.  The Old Town of Praja gave the film it's late 18th century Vienna feel.

After walking for what seemed miles, I got hungry, "Wanda let's eat!".... so we crossed one of the many bridges and I chose Kavarna Slavia Cafe with a view of the Cathedral across the river.  I noticed a guy playing on his iPad who looked strikingly like Albert Einstein and thought it made a great photo in this 1950's era lunch crowd with cigarettes and beer, coffee and cake. Later, as we are talking to a local about places to eat, she mentioned this classic Prague cafe that in the past was known for all the intellectuals and writers hanging out and talking for hours - The same place with the Einstein look-alike!  About the only thing out of place were a couple of "intellectuals" from the USA.

The optimist would say the Czech people are advanced in their public transportation and the abundance of trams and buses, the auto driver realizes nothing had been designed since the horse and buggy days and to drive here is to experience total road frustration. :-)  the confusion of roads and dead ends, ( I actually had to drive in reverse on city streets up to 50 yards to get out of a dead end, more than once) It even confused our Tom-Tom GPS.

Go to Prague, but do not drive there.


Wanda:
Once the car was parked, Prague became less stressful - and I wasn't even driving!  One way we "De-Stress" after a long drive is to eat and drink. So we find out where the locals like to eat and funny enough a favorite spot is Lokál.  The menu has a variety of traditional Czech food and they teach you how to order your beer.  Beer drinking is taken very seriously here since it is the national beverage.  (Coke is more expensive than beer) 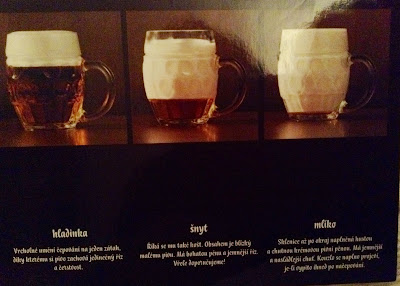 Foam in your beer mug is very important - it's your personal taste how much.  I will say upon observation that the middle beer "Snyt" is the most popular being served.

Czech / Bohemian cuisine is influenced by a shared European cultural heritage - traditions combined from the German-Czech, Czech-Slavonic, even the Soviet Empire left their mark.  If you want to go back further to King Charles IV  brought wine grapes from Burgundy and Josef Groll introduced Pilsen beer from Bavaria.  Enough history.  The Czech cuisine that we sampled was hearty and rustic.  On a cold fall day - we enjoyed the Beef Goulash, bread dumplings (knedilky), pork schnitzel,  sausages, potato soup (bramborovy), and lots of cabbage!  We were not there long enough to sample everything - so we will definitely be returning!

Posted by Richer For Wandering at 2:30 AM