Stockholm has to be the most civilized Capital city in the world.
The Metro/bus/ transit is the finest we have seen, on time, clean and filled with art work - some say its the longest art gallery in the world.  The city is loaded with Nordic Museums, Theater and Music. The people are so polite that if they bump you they will run up to apologize, really!  The city has the beauty of the Swedish Archipelago lined with historic and incredible buildings. Islands and rivers twisting through the downtown with bridges made for photo shoots. The clean keeps washing over you. Surprising in a city to see so little graffiti, perhaps it is the socialism that makes people think they are part owners of this city, so why deface it. We visited during the election time and the freedom of choosing, or even forming your own party was evident. I believe there is a feminist movement party that is looking to reprogram men to better understand consumerism.:-)  (this came from a male on the street pushing a stroller as a stay at home Dad, very popular in Sweden). Unfortunately, these Nordic countries just don't fit World Nomad budgets, so a quick trip to get Renata into school and off to the south of France.

I will say, after selling and driving Volvos for 25 years it was a pleasure to see so many on the streets. Police cars, taxis, all over were the beautiful Swedish cars. Perhaps that is what made Stockholm so beautiful?

Hej!!
We took a Viking Ferry from Turku Finland into Stockholm Sweden.  The Ferry ride which included a Swedish Smorgasbord was 10 hours and worth the 35 Euro!  Besides views of the archipelagos, there was entertainment on board, gambling, shopping and everything else you find on cruise ships. When we docked in Stockholm, we found another city we fell in love with (of course it was August)....

....When we got off the boat - the city had such a positive vibe about it, I don't know what it was -as Rich said, it smelled clean!  Stockholm is one of the cleanest Capitals in the world free from pollution surrounded by nature reserves, green spaces and waterways, which make up 60% of the city area (could also be the absence of heavy industry and fossil fuel power plants??)   Renata and  Rich are facing the Baltic Sea. If you zoom in on Richard he is wearing his tattered Volvo jacket - maybe after we leave Sweden he can finally lay it to rest.

We walked all of Old Town (Gamla Stan) - the original Stockholm from the 13th Century. The Old Town was first occupied about 1000 AD by the Vikings and the layout of the streets were kept medieval.


The tourist area of Old Town (Vasterlanggatan) trying to keep the Viking legacy alive by selling cheesy t-shirts and helmets.  Hmmm I think I remember Rich in the Norway post with a viking helmet......


We didn't take part, but we were able to watch the Vattenfall 2014 World Triathlon Stockholm  that took place in city center...made me tired and hungry watching...where's those opened face sandwiches Sweden is famous for!

The changing of the Royal Guard ceremony in Stockholm takes place every day at noon and lasts 40 minutes.  We have seen London, Athens, Prague, Vatican, etc. -  I have to say this was the most spectacular one I have seen.  The mounted military band is the largest in the world and quite impressive playing their instruments while trying to keep their horses at bay.


Everyone loves royalty - especially if they are cute. "Royal Pretty Boy" Prince Carl Philip and the paparazzi waiting for him to appear.  Bottom right is a female Royal Guard - Side-note:  In the Global Gender Gap Report 2013, Sweden is named as a world leader in gender equality measured in the areas of economics, politics, education and health (Iceland, Norway and Finland are up there too).  Bravo!


View of Grona Lund an amusement park at the edge of the Sea.  It is the oldest amusement park in Sweden founded in the 1880's.  There are 14 distinct islands that make up Stockholm - Grona Lund is on Djurgarden Island.  It's the island they try to keep all the tourists on.

What "Pops" up in your mind - QUICK -  when you think of Sweden??  Some will say Steig Larsson and The Girl with the Dragon Tattoo - others like myself, will say ABBA!!!!
Rich and Renata refused to go in this museum - what snobs!

Anyone who has been to IKEA - rest assured, a visit to the Stockholm Ikea cafeteria and the meatball dinner taste exactly the same as in the USA  (I don't know if that is good or bad, or why we would even go there) 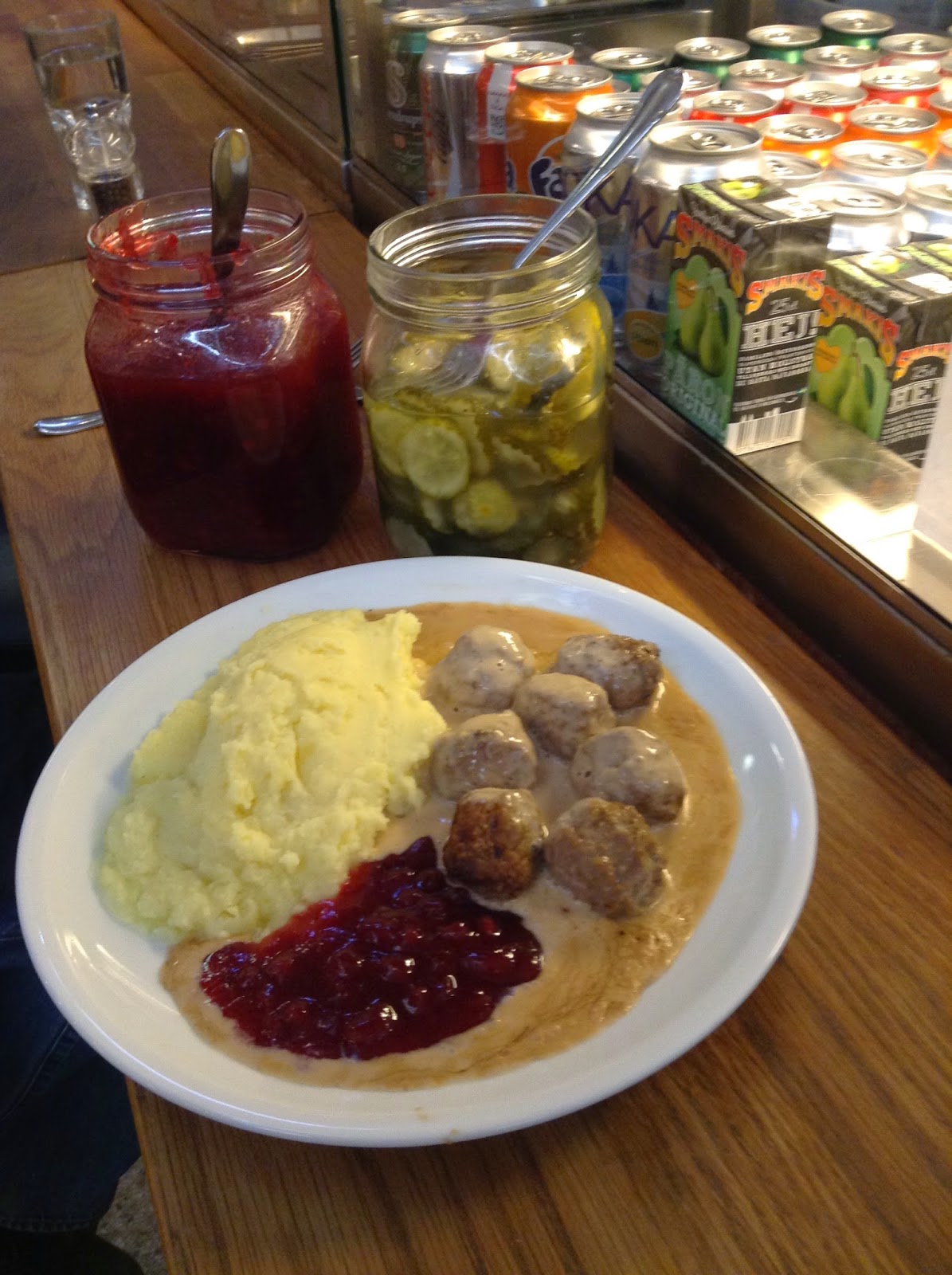 We had to taste the street food in Sweden, and while we were waiting in line at Gunter's to taste the Swedish sausage - the Swede pictured said "No - order the German or Austrian sausages they are far superior to ours- Swedish sausages are for the children!".  (OK, we already know for a fact how good Austrian sausages are).  We chatted a bit about the raising of children in Sweden, and he is quite happy because it is his turn to stay home with his child for the next 30 days and get paid 80% of his salary to do so.  We noticed there were 3 men with their strollers in line for those Austrian Sausages
Good for Sweden!

There are a 1,000 restaurants in Stockholm and as diverse as the city is, so are their restaurants.  We ate Chinese, Mediterranean Fusion, Thai - OK, now where do you find good Swedish food?  We loved the cardamon cinnamon rolls - if they are famous for that, then sign me up because they are perfect with coffee.  You find these all over the city - our favorite gooey buns were found right out of the oven in a little Kafe Sjostugan outside of the city in Solna. (no picture of these buns - sorry, we ate them too fast!) Swedish pancakes are always delicious - you can have them plain with lingonberries or stuffed like a burrito.

When you attend outdoor symphony under gray clouds without an umbrella and it rains (which is often in Stockholm) - nothing is funnier than seeing pages of music flying everywhere and musicians trying to beat each other to cover.  The vocalist was a trooper and kept on singing.

Why did we title this post "I'll Take Sweden, YA YA YA"?  (For those of you who are as old as we are,  it is a 1965 Bob Hope, Tuesday Weld, and Frankie Avalon so-called comedy - but we are just stealing the title)  It is because our lovely and talented daughter Renata decided to go to The Swedish Academy of Realist Art - Antelier Stockholm (SARA) for the school year!.....So we leave the daughter until Christmas!


On our way to Bordeaux!!

Posted by Richer For Wandering at 12:14 PM